Home > Blog > How Koi Fish Got Their Name 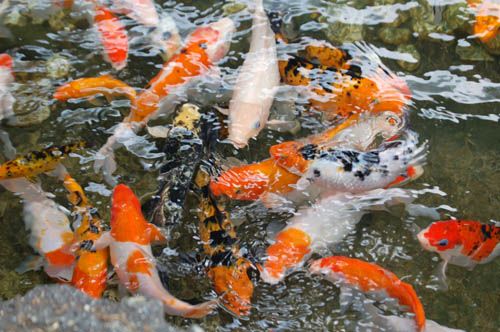 As you might expect, words over time get a little altered from their original sound. Think of the old grapevine game you used to play as a kid - by the end, the original phrase was seriously changed.

Now lets look at the original term for koi which is the Japanese word “nishikigoi”, which literally means brocaded carp.

You'll notice that the end of the word looks very similar to the modern word 'koi' -that's because through time and through thousands of conversations about these fish the original term got shortened to 'koi' from the ending 'goi'.

Now the exact origins of the actual fish are still unknown, yet there is a common belief that they originated around the areas of Western Asia and Persia.

In the 17th century Chinese farmers were keeping carp in their rice paddies and that practice was later incorporated in Japan as well.

Koi are essentially ornamental versions of carp that, through time and color mutations, began displaying colors beyond that of the drab brown of carp.

Those colorful ones were selected by hand to be bred to produce even more of these curious colored carp and eventually we got the art of koi breeding.