Home > Blog > The History Of The Hammock: What You Didn't Know 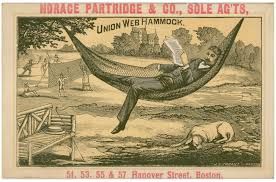 Back in the day (waaaay back in the day) there was a tribe that centered itself around what is now Florida as well as the West Indies.

This tribe was called the Arawakan.

A subsection of this tribe that lived in Haiti was called the Taino people.

They used a word for fish nets that looked something like amaca.

They also used this netting technology to sleep in which was an early form of what is know today as a hammock.

When Spanish explorers met these people and saw their fish net style beds they interpreted the word a little differently than amaca and eventually turned it into hamaca and of course through time it became hammock.

For a deeper look into hammock history, read on.

The origin and history of hammocks

Even the most casual glance easily explains the enduring popularity of hammocks. Rewind far back enough in history and you won't find smart phones or even automobiles, but what you will find pretty much everywhere you look are hammocks.

What is the origin of the weird word "hammock?" How did the modern hammock we know and love today evolve over the centuries? What, if anything, is different about today's hammocks as opposed to early hammock designs?

Where does the word hammock come from?

The word "hammock" is generally thought to have been derived from the Taino Indians of Central America (now Puerto Rico), who used the word "hamaca" to describe nets made from rope fibers that hung between trees.

Confusingly, there is also another definition for the word "hammock" that actually has nothing at all to do with a hanging hammock! It means a fertile piece of land that is raised above the surrounding land - so a land hammock of sorts.

This word "hammock" is derived from the word "hummock," which may have early American or English origins, although historians are not sure of its origins.

Interestingly, some anecdotal evidence suggests that the word hammock was one of the first words to become a part of common language shared by indigenous and immigrant peoples in Central America, pointing once again to the hammock's potential for universal appeal.

A brief history of hammocks

The first known example of a hammock takes us all the way back to really ancient Greece. According to none other than National Geographic, the ancient Greeks had a habit of hosting extensive banquets called "symposia."

At some point, the hanging bed became a regular fixture at these symposia. No one is quite sure why, but clearly the idea was a hit because it hung around (pun intended) for centuries thereafter and is still with us today.

However, it took literally centuries for the hammock we know and love today to show its face again. The next time the modern hammock appeared, it was approximately 1,000 years ago in Central America.

The Mayan culture adopted hammocks for their functional benefits rather than the simple joys of swinging between two trees.

Living in a tropical rainforest had its perks, but avoiding creepy crawlies with venom and stingers wasn't one of them. Sleeping off the ground in a hammock kept the sleeper safely elevated from night-time activity on the forest floor. Sometimes they would even light fires underneath their hammocks as a source of heat and insect control!

In 1492, none other than Christopher Columbus snagged some hammocks during his explorations and brought them back to Spain with him. After another hundred years or so passed, the British Navy decided the hammock was a smarter choice to keep sailors in their beds while passing through rough waters. That tradition has continued into modern times.

The origin of hammocks today

Intriguingly, hammocks in modern times are mostly viewed as luxury items. In fact, in most cultures today, it is a near-universal sign of rest and relaxation to see a hammock casually suspended in midair.

But functional hammocks are also making their own surprising comeback. Recent articles highlighting the sleep benefits of hammocks over conventional beds are taking the hammock mainstream.

The respected scientific journal Cell recently reported that the rocking motion of sleeping in a hammock is the same basic rocking motion that occurs when a parent rocks a child to sleep.

The journal took a look at why rocking helps babies fall asleep faster and how inducing that same motion might help adults combat what has now become an international epidemic of sleep problems.

The rocking motion actually sends a message to the brain to transition from a waking to a resting state that more easily induces sleep. Rocking can also support deeper, more restful sleep according to results from EEG scans.

Changes in modern hammocks compared to early ones

The history of hammocks makes it very clear that hammocks have a lot to offer on a functional level and have changed a lot.

Modern hammocks have the following features, all of which have endeared the hammock to military, sailors, explorers, civilians and even astronauts!

Sidenote: Additional data is now suggesting that regularly sleeping in hammocks may alleviate back pain, which is one of the most common chronic pain conditions people report today.

The reason for this is because, once the sleeper is in an optimal position, the hammock will hold them there much more securely than a traditional bed might. Hammocks are also touted as being able to help the body unwind and stretch back out after yet another long day hunched over a laptop or smart phone.

Then, of course, the gentle rocking motion of the hammock is likely to help the sleeper transition into sleep more quickly and stay there for longer.

Perhaps there is also a subliminal "swaddling" effect not unlike the comfort swaddling provides to babies (and close-fitting anxiety vests do for the family dog).

The origin of hammocks suggests that the appeal of hanging, rocking seating or bedding transcends culture and time itself.

Today, many different types of hammocks exist, from cooling rope hammocks to insulating waterproofed hammocks, camping hammocks to military hammocks and even bedroom hammocks for singles and couples.

Learning more about the origin and history of hammocks can help you decide whether the documented benefits of relaxing or sleeping in hammocks may have something to offer you.

Did you find this interesting?

Read our quick history of the term 'jackpot' to see where it came from!