Home > Blog > Knock On Wood Origin: Pagan Superstition Or Not? 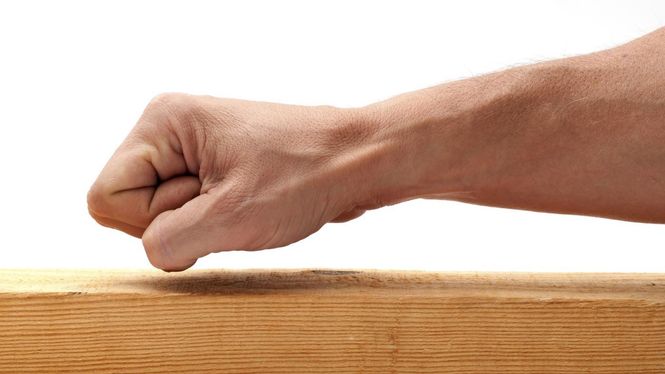 Most people have been in a situation in which a person has made a statement about something good happening then proceeded to knock on wood.

The origin of this phrase and tradition is not fully explainable however there are some scholars that point to its origin being in Eastern Europe or Ireland.

Centuries ago people believed that trees were sacred and contained spirits. When the trees were cut their spirits were subsequently released thereby making the wood available to house other spirits such as evil spirits.

By knocking on wood one would effectively drive any evil spirits away and protect the one making the statement of fortune from any future ill-fortune.

Another explanation is that one would knock on or touch wood to thank the leprechauns for their good luck.

In the U.S. the phrase used is “knock on wood” whereas the original phrase is actually “touch wood” and is used in the U.K. and elsewhere.

The Origin of the Expression “Knock on Wood”

Whether superstitious or not, most folks when gifted with a blessing, especially an unexpected one, feel compelled to literally knock on wood. Knocking on wood is thought to ensure that our good luck will not quickly run out.

It is as if acknowledging our good fortune might somehow jinx it and a corrective measure is required in case we become too prideful.

The origin of knock on wood is debated but its widespread use suggests a powerful underlying belief system that crosses borders and cultures. Not limited to English-speaking countries, common use of the expression can be found in virtually every part of the globe.

There are versions of knock on wood in no less than a dozen languages. In Denmark and Norway they say bank i bordet, which literally translates to knock under the table. In Egypt they hold the wood - emsek el-khashab. In Mexico one would toca madera, or touch wood.

Carrying out the tradition of knocking on wood also has many variations. In much of Latin America when you toca madera, it is considered bad luck to touch wood with legs, so tables, beds and chairs are out. In Denmark, you knock three times under a wooden table while saying the numbers 7-9-13. The variations are endless, but the underlying concept is the same, knocking on wood brings luck.

The phrase touch wood is more common in Britain, and many of the literal translations of the symbolic phrase knock on wood also equate to “touch wood.”

The general custom though is to knock on wood, not just touch it.

British folklorist Steve Roud wrote that the origin of the expression knock on wood is a Victorian children’s game called “Tiggy Touchwood,” a type of tag where kids are only safe when they were touching wood. This explanation seems unlikely.

Children’s games generally reflect customs and preserve cultural traditions and phrases rather than invent them.

The notion that touching wood equaled safety then most likely reflected current and past tradition.

The much more likely origin of knock on wood is that the tradition derives from the pagan worship of trees and tree spirits. Indigenous cultures throughout the world share a reverence for trees and imbue wood with spiritual qualities. The expression knock on wood and its derivatives may have evolved independently but linguistic evidence suggests it is a migratory term with an unknown origin.

In the middle east, ancient tradition held that God lived in the heart of trees. Religious statuary was often made from wood for this reason. When a believer needed the support or protection of God, they would knock on the wood statue to make their God wake up before making their petition. Knocking on wood for luck is still common practice in most of the middle east.

The Celtic tradition holds that trees harbor fairies, sprites and other spiritual beings. Knocking on trees, and by extension wood, most likely had the function of waking the spirit to your particular cause. Conversely, if a person sought protection from an arrogant claim, knocking on wood covered the sound of their boast, thus preventing the wrath of a bad spirit.

The notion that noise can scare away evil spirits is common across many cultures. In Mexico, the setting off of cohetes, homemade skyrockets that produce a huge sonic boom, precedes all major festivals. The practice is thought to scare away the devil and vanish all lingering evil. Firecrackers at a Pilipino New Year’s celebration perform the same function, and the list goes on.

Christians have borrowed from the tradition of venerating trees by worshipping wooden crosses. Touching wood in this tradition is a way to seek the protection of God and the saints. Carrying small pieces of wood, especially from a consecrated cross, was meant to bring good luck.

One origin story suggests knock on wood came from Jewish tradition. In the 1490s, during the nightmare of the Spanish inquisition, Jewish temples and synagogues were built from wood. Secret knocks were created to allow people fleeing persecution to gain entry. Knocking on wood therefore became synonymous with good fortune.

All of these histories and stories legitimately suggest the reasons why the phrase knock on wood could have become a part of so many lexicons.

None of them, however, definitively point to the actual origin of the expression.

Most sources agree that knock on wood is the American English equivalent to the British English touch wood, but none shed any light upon why the phrase morphed into this form in the United States.

Unfortunately, it seems evidence of the exact origin of the expression knock on wood has been lost to history.

Written evidence of the expression did not appear until 1905, with the British version of “touch wood” showing up a few years earlier in 1899. Likely facilitated by already held beliefs in the spiritual nature of trees and wood, the ready adoption of the expression and the practice of knocking on wood in so many different places worldwide further obfuscates its origins.

Though we may never know the precise origin of knock on wood, we can certainly agree that a great number of people on this planet consider it good luck to knock on, or touch, wood. Whether you knock three times, knock under a table, avoid tables with legs altogether, recite lucky numbers or utter a blessing, the tradition has the same function.

It offers us a small ritual that recognizes the power of spoken words and may even bring some luck our way.

And who couldn’t use a little extra luck?