Home > Blog > 'Rule Of Thumb' Origin And Meaning (It's Not Wife-Beating!) 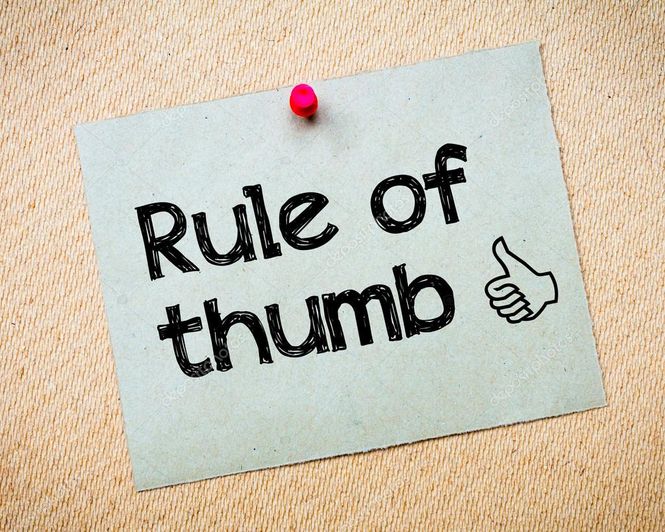 If you're from any Western country, you've likely heard the term 'Rule of Thumb'.

Essentially, the idiom refers to estimating a measurable quantity according to a rough and pragmatic rule, not based on exact measurement or scientific evidence.

It is often incorrectly stated that the “rule of thumb” expression dates back to a time in history when a man was allowed by law to beat his wife with a stick no thicker than his thumb. As far as can be determined the expression dates back to the 1600’s when, during a construction project, accurate measurement tools were not as readily available a handy body part would be used.

In this case the thumb was used as a rule of measure. Looking at a male adult’s thumb from the top it measures about an inch across just below the fingernail. This was a convenient way to quickly get a rough measure of something.

Just as King Henry I of England based the foot measurement on his own foot, thumbs were used as “handy” measurement tools.

Over the years, people have adapted the use of the term to refer to social rules in addition to actual measurements.

Now, "rule of thumb" is a phrase used extensively in many countries around the world.

Where does the term 'Rule of Thumb' come from?

The common belief is that the rule of thumb origin comes from an English law that allowed a man to beat his wife with a stick as long as the stick was no more wide than this thumb.

It's said that Judge Sir Francis Buller made the legal ruling in 1782, which was shortly after satirized by a political cartoonist who captioned his drawing with "thumbsticks -- appropriate for wife beating!". The rumor generated significant press and, for years after, Judge Buller was dubbed "Judge Thumb" by his critics.

Over the course of the century, several cartoonists poked fun at his alleged ruling; however, there are no actual existing records that prove he made the statement. Additionally, the 'rule of thumb' was never actually codified into English law, making such a ruling unlikely to have ever happened.

One English jurist, William Blackstone, wrote in the 1700s in Commentaries on the Laws of England that, "by an old law, a husband was justified in using moderate correction against his wife but barred from serious violence". Over the years, many have used this as evidence for the origination of the term 'Rule of Thumb', yet he never actually stated the word thumb in his doctrine.

The primary evidence for the rule of thumb origin is that several American and English courts outlawed wife beating in the nineteenth century, referring to the "ancient doctrine" where judges believed husbands could punish wives with instruments no thicker than their thumbs.

In a the supreme court case State vs. Rhodes, a North Carolina defendant struck his wife with a switch the width of his finger, and the judge found him not guilty due to the instrument being smaller than his thumb. Since the judge thought that the "rule of thumb" aligned with English common law, he believed there was precedence for wife beating.

Many etymologists have called the English law interpretation into question, as there have been earlier uses of the term 'rule of thumb' documented in English written and oral history.

Alternative explanations for the term's origin

The earliest appearance in print of the phrase "Rule of Thumb" comes from a collection of sermons from the Scottish preacher James Durham. In his own writing, dating back to the early seventeenth century: "Many profest [sic] Christians are like to foolish builders, who build by guess, and by rule of thumb, and not by Square and Rule".

In fact, the phrase was also found in Sir William Hope's 1692 publication, 'The Compleat Fencing Master': "What he doth, he doth by rule of Thumb, and not by Art".

So, how could these terms have popped up in earlier publications than Sir Buller's ruling? One explanation is that the width of the thumb, also called the "thumb's breadth in some sixteenth century literature, was used as the equivalent of an inch in cloth trade.

The thumb was used in a variety of industries in order to measure the length and quality of the product, which may be how it came to be associated with unspecific measurement. In fact, the thumb was used in brewing beer in order to inaccurately gauge the heat of the brewing vat. Germans have a very similar phrase used to indicate rough measurement - "pi mal daumen", which translates to "Pi multiplied by thumb", which could show that the thumb has been associated with approximation for centuries before the English law explanation.

Most etymologists agree to that the "Rule of Thumb" originates from old measuring practices rather than mythological court rulings in old English history. This calls into question, why has the wife-beating explanation become so common and accepted as the rule of thumb origin?

How 'rule of thumb' became associated with the old English law

One women's rights activist, Del martin, reported a link between the rule of thumb and domestic violence in 1976, stating: "The common-law doctrine had been modified to allow the husband to whip his wife, provided that he used a switch no bigger than a thumb - a rule of thumb, so to speak."

Many feminist writers took this as a literal reference to the earlier alleged English law from the eighteenth century. It didn't take long before the spurious connection between wife beating and the rule of thumb was fully adopted into the feminist canon, academia, and research publications all over the United States.

Until the early 2000s, the origin of the Rule of Thumb persisted in dozens of legal and academic sources and was circulated as fact. In fact, some feminist writers protested the use of the term due to its taboo association with wife beating. Now, 'rule of thumb' has circled back in feminist debates to demonstrate the effect of inaccurate statements on social movements.

Summary: Where did 'rule of thumb' originate from?

Although the true origin of the term remains unknown, it's clear that 'Rule of Thumb' never originated from old English wife beating law or the common doctrine. Like the phrase, "the whole nine yards", the phrase "rule of thumb" most likely originates from the methods that industry professionals used to approximate measurements over the centuries.

Over the years, the term rule of thumb has become closely associated with wife beating due to several old American court cases and feminist revival that occurred in the seventies.

See where the term 'jackpot' came from.